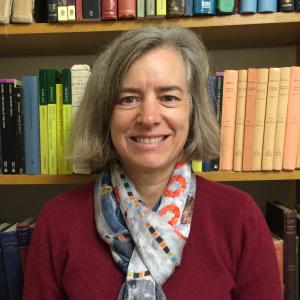 Professor Jaeger received her Ph.D. in Classics from the University of California at Berkeley in 1990, her M.A. in 1984 from UC Berkeley, and her B.A. in 1982 from Gustavus Adolphus College. Professor Jaeger chose an academic career in Classics because she loves Latin. She has been at the University of Oregon since 1990, with the exception of a post-doctoral year at Harvard (1993-4), and enjoys teaching both Latin and Greek, as well as lecture courses on topics in Greek and Roman culture.

Professor Jaeger is interested in the stories that Romans told about their past and the monuments that preserved that past. She is the author of Livy’s Written Rome(University of Michigan Press 1997), Archimedes and the Roman Imagination(University of Michigan Press, 2008), and A Livy Reader (Balchazy-Carducci, 2011). Her recent publications reflect her interest in Food Studies: “Blame the Boletus? Demystifying Mushrooms in Latin Literature,” Ramus 40.1 (2011); “Why is there no Cheese in Horace’s Satires?” AJP 136 (2015).

"Why is there no Cheese in Horace's Satires?"